Shine Studios was the name of the company at the time it developed Saints of Virtue. It was really just three guys - Bud Gillian, Michael Ulrich, and Dave Slayback. But I discovered sometime in 2014 that Shine was actually the second version of the company. Before releasing Saints of Virtue, they called themselves Luminous.

How did I find out? Well, my memory is hazy, but I think was just Googling around for Saints of Virtue references and stumbled across their original website as Luminous. It was hosted on magiclink.com, and a few fragments of the site were captured by the Internet Archive here.

At the time I used HTTrack to crawl the website and download more content than the Internet Archive preserved. You can check out what I saved here. But let’s go through it and I can call out some interesting things.

Most striking is some concept art for the Labyrinths of Legalism:

As well as an alternate shot of the Saints armor: I’ve talked more about these here, and included a snippet from an old Saints Newsletter.

There’s also this screen of what looks like the Media Maze. I don’t remember those textures, so this might be a beta screenshot (I’d have to do another playthrough to confirm):

As a result there is a very interesting file left on the site that isn’t actually reachable from the main shine.htm page. That’s the original Welcome.html from when Shine was just transitioning to Luminous.

Here we have the old company logo:

And the tagline “…No Bushels Around Here…”, which is a reference to the “bushel baskets” of Matthew 5:15.

And for some reason, I’m only just in 2022 realizing a very interesting reference on this page:

Bookmark this page and check back often for information and links to SHINE’s upcoming website. Featuring FAQS, demos, and sneak peaks, from SHINE’s newest projects…

Projects plural! Not just “project”! Well, what projects did they have other than Saints of Virtue? 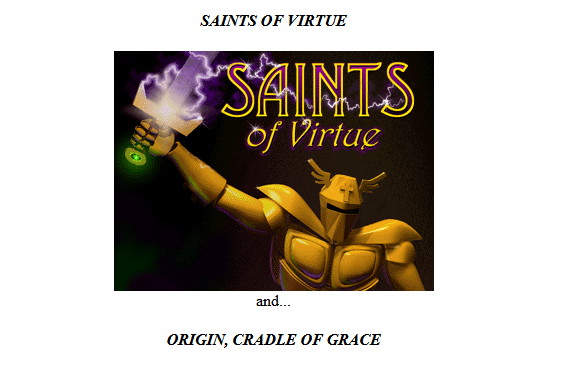 So Shine, as Luminous, had worked on a project called “Origin, Cradle of Grace.”

Searching for this led to me to a compilation disk called “Ultimate Bible Games Volume 1”, from around 2000. This disk was one of four such collections published by Soverign Software. Check out an archived page here.

I bought a copy off Amazon and I’ll report back once I’m able to check out this “lost” pre-Shine game. I’m pretty excited to see it.

What’s funny is that I remember seeing these “Ultimate Bible Games” disks years ago at a Christian bookstore in Branson, MO. (I don’t remember which.) They were weathered and sunfaded and the shrinkwrap was eroding. This was probably around 2005. They’d been sitting there a long time.

Saints of Virtue itself showed up on Volume IV, as you can see here.

I don’t know if this was a full version, a trial version, or even a different build (unlikely but would be cool!). I’d like to get a copy to find out. As of now, I can’t find any for sale. It seems that the series is harder and harder to find as you go from 1 to 4.

Anyway, back to the Luminous site.

We find that the “Vanity” was originally called “Pride”:

“Apathy is inhabited by the enemies of Worldliness and Pride.”

The change to Vanity was probably made to distinguish two “Pride” enemy types with similar names:

“The common worldly tendencies and temptations, such as PRIDE, WORLDLINESS, LEGALISTIC PRIDE, and FEAR are graphically represented by masks that we sometimes wear.”

The enemies were later called Masks, which is mentioned above, but originally they had a more friendly name:

“These enemies, called bigheads, are powerful, cunning, and very destructive to our lives.”

Also in these files, but not linked anywhere in the HTML, is a Smacker-codec video file advertising how Shine/Luminous intended to overhaul the Christian gaming industry. There’s a YouTube upload here. 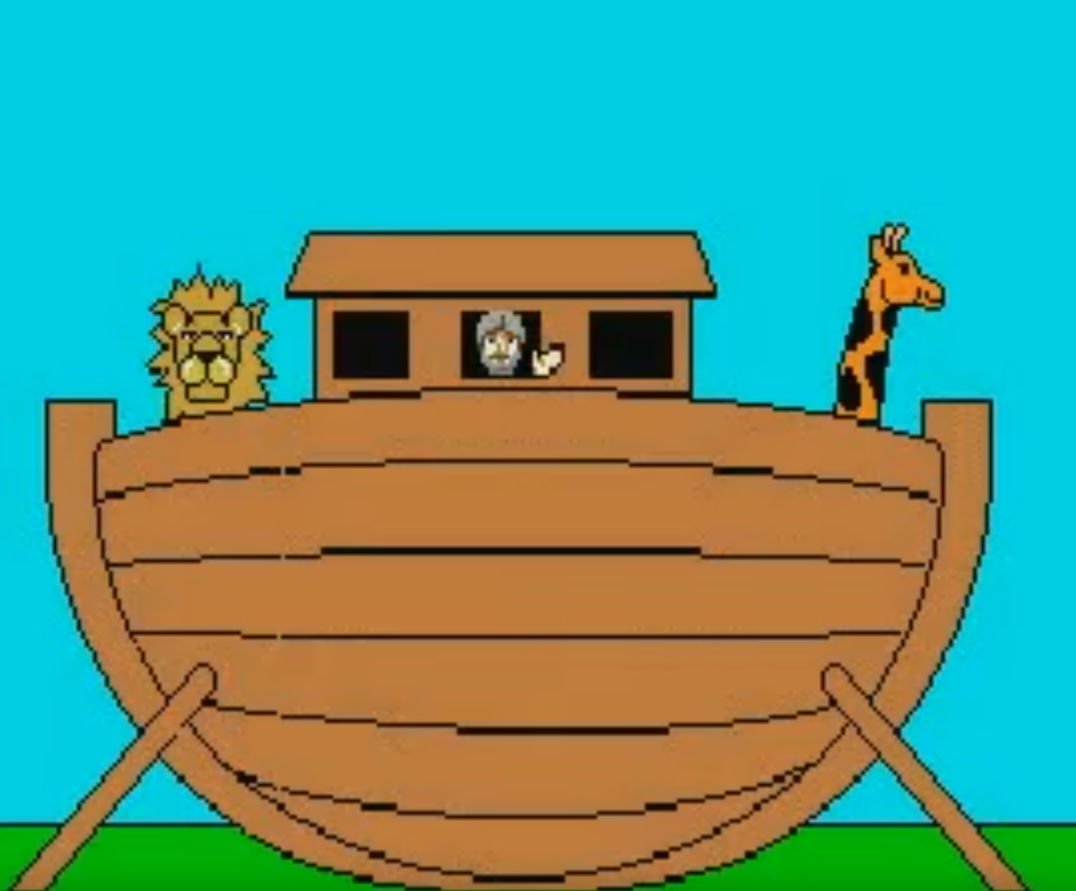 That’s most of the interesting stuff. There are some cute animated GIFs of Vanity, Legalism, and the Saints armor. Download the zip at the top of the article to see for yourself.